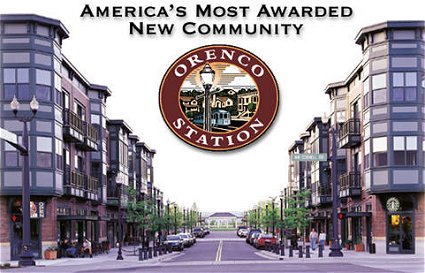 “The Orenco Station study is probably the first to show, in an academic study, such a big difference in social activity between a new urban community and a comparable suburban development. Also, it is the first to show such high rates of walking to stores.”New Urban News, September 2009

In the late 1990s, the Fusionhappens creative crew led the team working with developer Rudy Kadlub on the branding and marketing of Orenco Station, just west of Portland in the Hillsboro area.Orenco Station was one of the Northwest’s first TODs (Transit Oriented Development) with its own stop on the new MAX train from downtown Portland.As the creative director on the project, my job was to bring to life the concept of a lifestyle that broke with the prevalent suburban mode.

We believed the planners when they said a walkable community would be more healthy.The planners also said that the front porch architecture and community gathering places would foster neighbor-to-neighbor contact and communication, and that should make people happier.We believed that, too.Other experts hinted at the savings in commute time and other cost benefits that would actually save residents money over time, making them wealthier.We bought it all and created brochures, sales presentations, sales offices and newspapers ads that told the story.People bought the story, making Orenco Station one of Portland’s real estate success stories.Our peers bought the story, awarding Orenco Stations the prestigious America’s Community of the Year at The Nationals Awards presented by the National Association of Home Builders.

Recently, Urban Land News published an article summarizing the findings of a study by researchers from Lewis and Clark College, led by sociology professor Bruce Podobnik.Their study takes a look at social issues, transportation patterns, and other factors that make up the overall wellbeing of these neighborhoods.Their findings were very gratifying to our team.We found in it proof positive that residents of a well planned TOD or Urban Village like Orenco Station are happier, healthier, and wealthier.It’s well worth the read.